Attack on Journalist in nellore 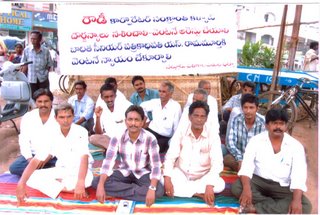 In a gruesome incident a senior journalist Sarvepalli Rama Murthy Editor of State Leader has been attacked bacause of his writing in about activities of of local corporator of Sancranti kalyan who also thretened him .Later united local jounalists protested attack in a commendable way.many of the local media people also joined in condemning the incident including jaap.local dailies Andhra prabha ,Vaartha,Bhoomi, have covered the protest rally event and given prominetnt coverage in their rallys .this shows freternity unity among fellow journalists.
Attacks on journalists have been on raise nowadays thousands of jounalists are dying in coverage events yearly diring thier coverage. A responsible person who is elected by people whos action like this on widely discussed in public.
the situation i n nellore is tence now and efferts are to pacify both the parties by local police.the effygy of rowdy corporator is going to be burnt this evening as said by protesting journalists.
the follwing journalists have attend the protest rally and shown support for their collegue.